The Spectacles of Apuleius
Uri, vinciri, verberari ferroque necaru, et quicquid aliud ... iussisset.
To be burned, bound, beaten, and put to death by the sword, and to do whatever else might [be] order[ed to] us.
- Gladiatorial Oath
- Petronius. Satyricon. 117. 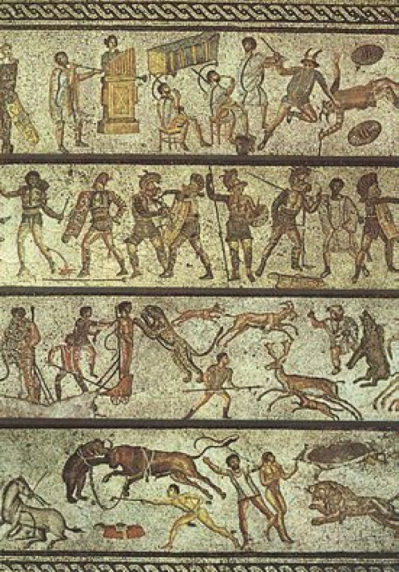 A Brief Overview
The origin of gladiatorial combats was not said to have been Roman.  Roman sources have attributed the start of the games to either Campania (Livy. 9.40 and Silius Italicus. Punica. 11.51) or to the Etruscans (Nicolaus of Damascus. Athletics. 4.153).  The evidence from Etruscan tombs indicates there was a practice of holding funeral games on behalf of the privileged dead.  In Campania, the elites were said to have held these combats at banquets (although these sources are writing at a much later time and have their own biases).  In Roman times, these games were originally small private combats held as part of a funerary tradition (munera).  These fights were sponsored by the elite as a means of mourning those among their ranks who had died and they increasingly became a way to gain public acclaim and political clout (particularly after the time of Julius Caesar). During the Republican period and throughout the Empire, the level and elaborateness of the games escalated as elite individuals strove for public recognition, both to establish and maintain their power base (in the Empire, the emperor would be the benefactor of the imperial games).  Some examples of the escalation of events are as follows:

The gladiators who fought in the arena were generally captured soldiers (prisoners of war), slaves purchased and trained from a young age, or condemned criminals.  It was also possible to become a gladiator by volunteering.  If this was the case, the term was 3-5 years and in volunteering, they were agreeing to give up all of their citizen rights for life.  They would be considered of no status as with prostitutes, mimes, and actors (Ulpian. Digest. 3.1.1.6).

Status of Gladiators
When one considers gladiators in modern times a sense of glory and victory may be associated with this.  While it is true that some gladiators were highly successful, attaining fame and glory in society, their status was nevertheless diminished by their profession.  All individuals who use their bodies for the entertainment of others were considered to be infames in Roman society.  They were the lowest part of the Roman hierarchy and were considered to be on par with actors and prostitutes who also used their bodies in their work. Despite this fact there were some (including certain Emperors, i.e. Commodus) who did not fear such status and instead entered the arena voluntarily.

Emperors and Gladiators
There is a strong connection between the emperors of Rome and ludi in general due to the political aspect of holding these games publicly. While all emperors held games for the public, in order to gain the favor of the populace and to bolster their position, certain emperors showed a bit too much enjoyment for these types of spectacles.  For example, the Emperor Claudius (reigned AD 41-54) was said to have enjoyed the games for more than was socially acceptable.  He would stay at the games all day long and appeared to enjoy the public executions.  Moreover, he is said to have been swift to order the death of gladiators who had fought and even worse, he enjoyed killing the retiarii as they wore no helmet and their faces were therefore visible whilst dying (Suetonius. Life of Claudius. 8.4 and 34.1).  While the games were a means of entertainment, the status of gladiators was on par with prostitutes in ancient Rome and therefore few elites would deign to actively participate in such an event.  During the reign of Nero (AD 54-68) elites were 'allowed' to fight as bestiarii and gladiators (although it is uncertain how voluntary this would have been).  Moreover, there was one emperor who did not adhere to social conventions at all and who demonstrated a fanaticism for gladiators.  The Emperor Commodus (reigned AD 180-192) is said to have been born from a mother who had an affair with a gladiator.  She bathed in the blood of a gladiator to rid herself of her obsession as she was told to by her husband Marcus Aurelius. This story though sensational hardly seems to be based in fact, but is representative of the strong passion Commodus had for these combatants.  He is said to have dressed himself as Hercules and Mercury (who carries off the deceased gladiators) and he himself fought in the arena (Cassius Dio. Roman History. 17).

Female Gladiators
Contrary to popular belief, males were not the only ones to fight in the arena.  There are both literary and material records of female gladiators fighting as well.  Although these were certainly not as common as their male counterparts they were an important part of the games and offered a somewhat novel aspect to the games in which they took place.  Our main literary evidence of these female combatants stems from the legislation surviving which reference attempts to limit and/or abolish this type of fighting.
Photograph (top above): Zliten mosaic, detail of gladiator panel. Villa of Dar Buc Ammera.
Photograph (center): Zliten mosaic, detail of border panels. Villa of Dar Buc Ammera. 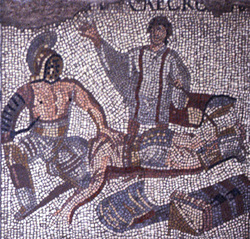 Ludus Magnus: one of the 4 imperial gladiatorial schools. Built by Domition (AD 81-96)

Ludus Gallicus: one of the 4 imperial gladiatorial schools.  Built by Domitian (AD 81-96)

Ludus Dacius: construction started under Domitian and completed under Trajan