Impious Mars rages though the entire world, as when chariots pour out from the starting gates onto the race course, and the charioteer, grasping the reins in vain, is carried away by the horses and the chariot does not listen to the reins.
- Virgil. Georgics. 1.511-514. 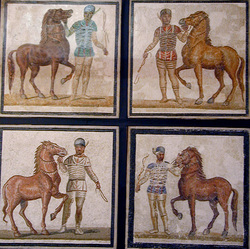 A Brief Overview
Chariot racing was not developed by the Romans, it had been popular long before the Romans came into power.  The Mycenaeans (1450-1200) appear to have had chariot racing as an elite activity and the Greeks most certainly used it as an important part of their games including the Panhellenic games held at Olympia.  In Roman times, chariot racing reached a new level of popularity.  The emperors themselves embraced this form of entertainment, sometimes combining them with other events such as Claudius (reigned AD 41-54) who held elaborate games in which a beast hunt was carried out in the middle of a chariot racing event (one can only image how chaotic this event could have been).  The emperor Nero (reigned AD 54-68) was known for his flamboyance and love of all things theatrical.  He also was attributed with an attempt to reorganize the Olympics in which he ordered a ten horse chariot race (again, the ensuing chaos must have been great).  Aside from Nero's event, races generally consisted of two types of chariot: the two horse (biga) or four horse (quadriga) chariot.

Factions
The above image shows the four circus factions into which the chariot racing teams were divided.  These consisted of the green, blue, red, and white teams.  During the reign of Domitian two additional teams, the purple and gold were added (Cassius Dio. Roman History. 67.4).  However, these were later abandoned in favor of the original four.  Like modern sporting events, competition was fierce and fans were fervent about their teams.  Such loyalty resulted in riots and curses among other ancient signs of rivalry.  It appears that of these factions, the reds and whites were less well known, while the blues and the greens appeared to attract a more obsessive and at times, violent, crowd.  While all teams are owned by different individuals, the four color factions are repeated all over the empire.

Famous Charioteers
Charioteers were famed throughout the Roman world and were treated as athletic heroes.  They did not suffer the same stigma as gladiators actors and prostitutes, instead they were treated as heroes with reputations lasting long past their deaths.  These athletes could not only rise in status and popularity, they could also become extremely wealthy if they were successful enough.  There were however, some negative side effects to racing which was itself very dangerous.  Not all charioteers rose to fame and glory.  Many perished for the sport they loved.  Nevertheless, there are several surviving examples of famous charioteers recorded in the literary sources some examples of which are as follows: