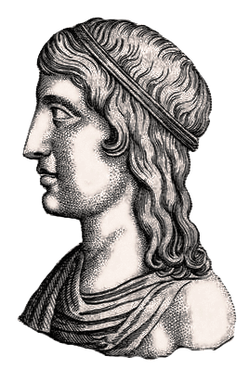 Lucius Apuleius was born in Madaurus (Africa Proconsularis) c. 125 AD to prosperous parents. In his work Florida (18, 20, 16) he recounts his extensive travels in which he was educated at Carthage, Athens, and Rome. His travels included a pause at Oea (Tripoli) where he married a woman named Pudentilla, the mother of a former pupil of his (at Athens).  Apuleius was supposedly convinced by this student to marry his mother in order to protect her fortune for the family.  However, he was later accused of having forced her to marry him through the use of magic.  Apuleius’ Apology describes his defense as he was put on trial at Sabratha (near Oea) in AD 158/9 on charges of witchcraft.  He was subsequently acquitted.  The theme of witchcraft is also prevalent in the Metamorphoses, which is the only surviving complete Latin novel. There is nothing known about Apuleius after AD 170.