A tigress, often licking her fearless master’s hand, a rare glory from the Hyrcanian (mountain), tore a wild lion savagely with her rabid teeth: a novel incident, encountered at no earlier time, she did not attempt anything like that, while she lived in the tall forests: now that she is among us, she has more savagery.
-Martial. De Spectaculis. 21. 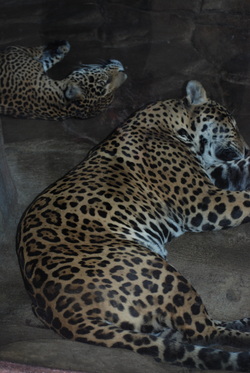 The venationes were the morning event at the amphitheater.  This was one of the most popular parts of the games, especially in certain areas such as North Africa where hunting was a regular part of life.  In general the concept of animal fighting and hunting was not novel.  It was in fact considered an elite activity in Roman society.  What is novel about the Romans is their transformation of a leisure activity for the elite into an entertaining spectacle for the populace at large.  In this part of the games the crowd would witness either animals fighting one another or humans hunting animals.  The execution of criminals by animals was referred to as damnatio ad bestias (condemned to the beasts) and was a separate component of the games (see the ludi meridiani section of this website).
In the earliest Republican spectacles, animals would sometimes simply be exhibited in the arena or in the circus (i.e. in Rome prior to the construction of the Flavian amphitheater).  This practice may have continued under the emperors, but as evidenced by the literary sources as well as mosaic depictions there may have been more interest in the bloodsport involved in the actual hunt (after time the novelty of simply viewing foreign animals wore off).  It is unclear to what extent the animals fighting were actually killed in these combats.  These creatures were a valuable commodity and were not easily replaced.  The patron of the show would need to ensure a careful balance of death for entertainment sake and the preservation of a good animal or fighter for another event.  Therefore the concept of missio (pardon) was possible (here as well as in gladiatorial combats) for those fighters who had provided the crowd with an entertaining show, but who were excused before the death of the animal or the fighter.
During the imperial period, venatores (hunters) seemed to be lightly armed, using lances or spears against the animals and protected only by fasciae (padded wraps on legs or torso).  There were also special types of fighters such as the taurocentae (bull fighters) who fought on horseback.  For the most part those men fighting animals such as boars, bears, and great cats fought on foot (Futrell, The Roman Games, 89).  As with the gladiatorial combats, the venationes were a political tool used by the elite to gain the favor and support of the populace.  As a result these games increased in size and the number of animals reached astounding levels as members of Roman society vied for position.  The increasing need for animals, especially those which were rare and foreign, in conjunction with the development of agriculture, led to diminishing numbers of animals in the wild.  As evidenced by Marcus Caelius Rufus' letters to Cicero begging for panthers, these were becoming more and more difficult to obtain (Cicero. Letters to Friends. 8.6-9).  These letters also demonstrate the political power wielded by those who would or would not grant these much sought after beasts.

Origins of the Venationes

There were two different traditions for the origin of the venationes:
1. Indigenous Italic tradition:
2. Imported tradition from the Punic domains of North Africa:
Key dates:
Obtaining Animals for the Games

The Romans were interested in obtaining as many animals as possible in order to supply their games.  In general a wide variety of animals were used, from ordinary hares, deer, and boar to the more exotic crocodile, hippopotamus, and lion.  The Romans also had a predilection for big cats including lion, leopard, and panther.  However popular these beasts were, Roman patrons were also looking for unique animals, the more exotic and unattainable, the better.  To this end they sought the far reaches of the empire and used vast resources in order to acquire and safely transport these creatures back to Rome.  Due to the political nature of the games, the more impressive your menagerie of animals, the more likely your games and your name along with it were to be remembered.  The ability of a patron to provide many and unique animals in his spectacle was an indicator of the power and wealth of the individual.
The process of capturing and transporting animals for the games was not an easy or inexpensive process.  The literary sources provide relatively little information about this process as the ancient authors appear to be more interested in the spectacles themselves (at least as far as the texts we have surviving are concerned).  During the Republican period there appears to have been less of a formalized structure in place for obtaining wild beasts, but as the need for these creatures increased it appears to have become (at least slightly) more regulated.  By the late Republic the supply of animals was the responsibility of the magistrate putting on the show.  As indicated by Cicero's correspondence with Marcus Caelius Rufus this could be a stressful matter when items such as panthers were needed, but could not be found (Cicero. Letters. 8.6-9).  By the time of the empire, it is evident that the military had become involved with the capture of animals for these shows.
Hunting for these animals was not an easy job and there were many risks associated with it (both for the one capturing and the one being captured).  In this process the hunters could be severely injured or killed, therefore they used creative methods for capturing animals as is shown on many Roman mosaics (including those from Piazza Armerina).  There was also pressure placed on hunters to find specific animals at a given time, a feat which became increasingly difficult as time went on and areas were becoming depopulated.  Once the animals were caught, the task of keeping them alive while they were transported to the location of their shows began.  There was a huge cost associated with this.  These animals would have to be fed and watered and brought back from, at times, very remote areas.  They would also have to survive the possibility of shipwreck if traveling by sea, a common occurrence in ancient times.  As the story of Demochares in Apuleius' Metamorphoses demonstrates, even when they were brought back alive, they may perish due to disease before they have served their purpose (4.13-26).   Those that did survive would be put to full use in the arena.

Storage of Animals at the Colosseum at Rome

The exact date of the subterranean storage spaces in the Colosseum used for the containment of animals and technical props is unknown, although Bomgardner (The Story of the Roman Amphitheatre, 21) asserts they were possibly added during Domitian's reign (AD 81-96). These underground structures consisted of a series of 32 self-contained iron cages with 8 in a quadrant, accessed on the minor axis of the Colosseum by two underground tunnels connected to the outside.  When the animals were needed in the arena they were hoisted onto the upper level where they would be release at the appropriate time.

The Colosseum - An Example of the Defensive Measures in Place in the Arena
The Romans were known for their penchant for big cats (lions, tigers, leopards etc.) the inclusion of which required precautionary safety measures to be taken in the arena in order to protect spectators from the inherent dangers.  Ensuring that the animals remained in the amphitheater and killed only those whom they were supposed to was of the utmost importance.  Therefore safety measures were put in place to ensure that all creatures, especially those who could jump, stayed in the arena at all times.  These safety features are outlined by D.L. Bombgardner in his work The Roman Amphitheatre (p. 21) and will be summarized here:

The End of the Venationes
Due to their popularity (and the fact that few humans, especially Christians, were killed in this event), the venationes was one of the last spectacles to end in the Roman world. The precise date of the last known venationes is unknown at present.  Due to the inclusion of the cost of lions on the Edict of Maximum Prices by Diocletian (AD 301) it is clear that the venationes continued at this time.  After this point, however, evidence on the venationes becomes scarce, with only sporadic mentions in various sources (such as law codifications and Christian sources).  However, it is clear that a shift occurred in the 4th-6th centuries when in AD 498 during the reign of Anastasius there was a decree banning the killing of animals in the arena in the eastern part of the now divided empire. It appears as though a ‘tamer’ version of these games took place thereafter  (Bomgardner, The Roman Amphitheater, 219).  Although no such decree has survived from the western part of the empire, it would seem likely that a similar situation was taking place. The last recorded venatio that took place in Constantinople was on 1 January AD 537 (reign of Justinian) and in Rome on 1 January AD 523. The cessation of these games coincided with the decline of the amphitheater itself as these structures were no longer needed for public entertainment.  Despite the fact that no Roman games are attested after this point there is evidence of animal fighting taking place after the fall of the Roman empire in certain areas (i.e. Leo Africanus in the 16th century - see Bombgardner, 224 and Leo Africanus. Description of Africa II, 457). 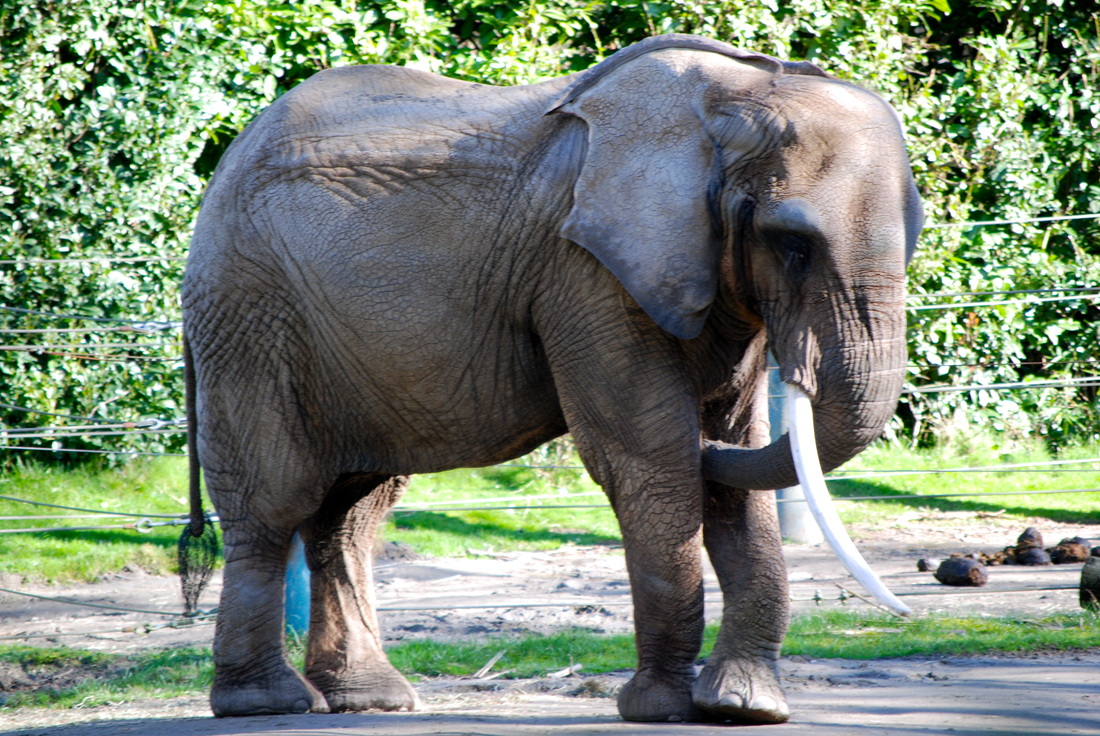